Thanksgiving is just around the corner, and it has us wondering — just where has this crowd-pleasing recipe bean all our lives?? This simple-yet-scrumptious skillet steals the spotlight with earthy mushrooms and bright green beans tossed in a rich, bone broth-based cream sauce. Crisp, golden brown onions lend an irresistible aroma to this cozy dish. Just don’t get your heart set on leftovers—your extended family will be clamoring for every last bite.

For beans and sauce:

Preheat the oven to 475 degrees F.

Combine onions, flour, panko & salt in a large mixing bowl and toss to mix evenly. Coat a sheet pan with nonstick cooking spray and spread the onions in a thin layer on the pan. Bake until golden brown on the middle rack of the oven, ~30 minutes. Stir onions occasionally as they cooking. Once golden brown, remove from the oven and set aside. Reduce oven heat to 400 degrees F.

Meanwhile, bring a gallon of water + 2 tablespoons of salt to a boil in an 8-quart saucepan. Add green beans and blanch for 5 minutes. Drain and immediately immerse the beans into a large bowl of ice water to stop cooking. Drain and set aside.

Melt the butter in a 12-inch cast iron skillet set over medium-high heat. Add the mushrooms, 1 teaspoon salt and pepper and cook, stirring occasionally, until the mushrooms begin to give up some of their liquid, approximately 4 to 5 minutes. Add garlic and nutmeg cook for another 1 to 2 minutes. Coat mixture in flour and stir to combine. Cook for an additional minute. Add the chicken bone broth and simmer for 1 minute. Decrease the heat to medium-low and pour in half-and-half. Cook until the mixture thickens, stirring occasionally, for another 6 to 8 minutes.

Remove from the heat and stir in the green beans and 1/4 of the onion mixture from earlier. Top with the remaining onions. Place skillet into the oven and bake until bubbly, approximately 15 minutes. Remove and serve immediately. 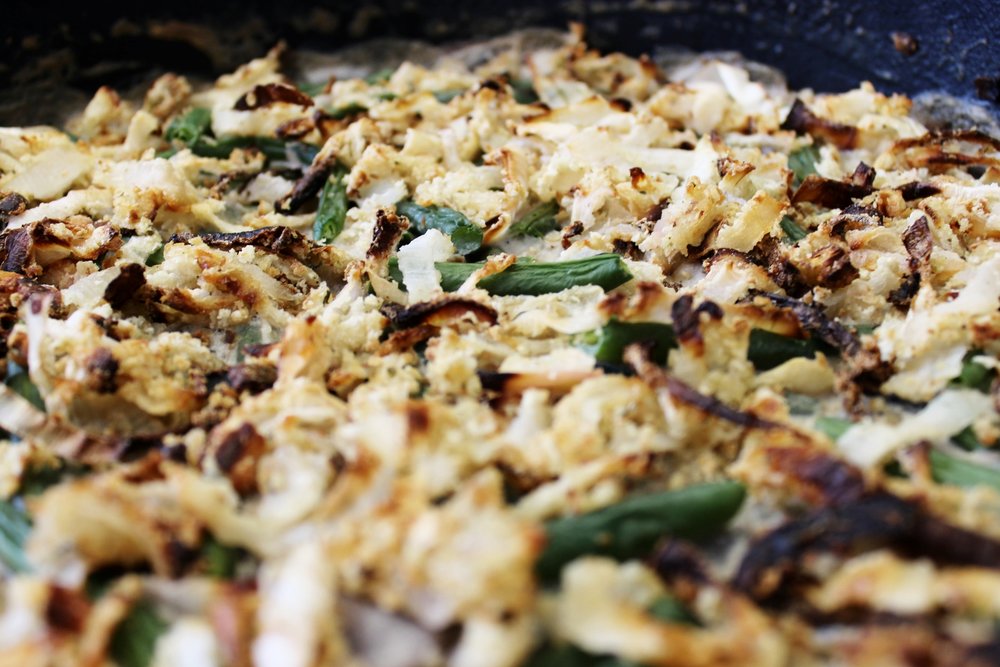 We do things differently.

Instead of relying on preservatives and extreme cooking methods, we make our broth the traditional way, slow-simmered using whole ingredients. Then we store and ship every bottle cold. That way, our broth retains its home-cooked flavor and nutritional value.